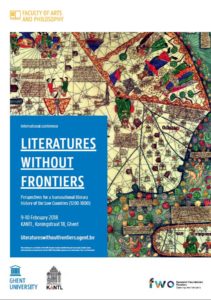 Perspectives for a Transnational Literary History of the Low Countries

Traditional literary historiography is rooted in the 19th-century construction of national literatures based on the political desire to demarcate national states and their corresponding linguistic identities from each other. For the study of the literature that predates the 19th-century nationstate – the literature of the period that will be central in this conference (1200-1800) – the taxonomy of literary phenomena on the basis of geographical frontiers that were in most cases non-existent at the time, is a highly artificial though very common practice. In our view, the study of literature in this long period is better served by a transnational perspective, if only because of the transnational character of its functioning. On account of their limiting focus, nationally oriented literary histories of the periods in question cannot but undervalue the actual cultural processes at work both in the international ‘Republic of Letters’ as well as in the language regions that exceed the borders of the current nation states.

In the past few decades, several attempts have been made to develop new literary histories that are driven by a transnational, pluri-lingual perspective. Denis Hollier’s New History of French Literature (1989) would be an early tentative example, but there are more recent ones that develop the transnational perspective more systematically: the New History of German Literature, edited by David Wellbery, Judith Ryan and Hans-Ulrich Gumbrecht (2004); French Global. A New Approach to Literary History, edited by Christie McDonald and Susan Rubin Suleiman (2010); and Greil Marcus and Werner Sollors’ A New Literary History of America (2012). Last year, David Wallace edited Europe, A Literary History, 1348-1418, a book that is structured through 10 sequences of places that are connected through trade, pilgrimage, etc. and literary exchange. So far, the historiography of the literature produced in the Low Countries has not really profited from this new approach. While the ‘medieval’ and ‘early modern’ volumes of the recent Geschiedenis van de Nederlandse Literatuur do pay attention to the presence of non-Dutch literary writings in the geographical space under scrutiny, both the object and the methodology of research is largely defined by the same parameters that mark traditional, more ‘nationalist’ literary histories.

This conference aims to bring together a number of telling examples that advocate a transnational perspective for the construction and writing of the literary history (histories?) of the Low Countries in the period 1200-1800. Papers will address case studies (authors, texts, translations, mechanisms of textual production, motifs, tropes, genres) that on account of their ‘transnational’ character have fallen outside the scope of the current attempts of literary historiography. Other papers will focus on the literary infrastructure that enabled the cross-border reception of literary texts (like the repertoire of travelling theatre companies), or on case studies that are discussed in extant histories but whose impact and importance could be brought out differently (more interestingly, hopefully) in a transnational framework.